As some of you may have noticed, another year has gone past and we now find ourselves in 2017 land. If you hadn’t realised yet, you’re welcome.

Unfortunately, we’re already deep inside the new year’s grounds as I write this post: deadlines and an improvised trip to Switzerland ( blog post to come soon ) kept me MIA for the past couple weeks, so here I am, late as always, writing my 2017 entry almost at the end of January. But let’s get into it shall we?

2016 has been a year of new experiences for me, in a lot of fields. I went on Erasmus (is Scotland considered Erasmus for me? Let’s say it’s not), moved to a new place, met loads of people and made great friendships with other internationals. I also finally went to Paris, which ridiculous as it might sound I had never actually visited. I crowned by dream of visiting the Pantheon on my birthday, went to the Moulin Rouge in person and walked on the point zero sign which I’d always dreamed of. I had interviews with huge companies which, although not all successful, gave me a huge confidence boost and made me realise I can actually achieve more than I thought. I discovered Scotland a bit more, past the big cities like Edinburgh and Glasgow, and went to find the smaller places no one really sees. I got a scholarship!! Which I thought was way beyond my abilities. I finally went to to the Netherlands – and actually lived there! Which allowed me to see beautiful places I will never forget. I had my first couch surfing experience – better late than never, right? Which proved to be funny and unique and definitely worth doing again.

I set foot in a total of 6 countries – soon to be 7! – within a year, from my home Italy, to the UK (England and Scotland), to the Netherlands, Belgium, Hungary, France and in the last week Switzerland as well. I had days when I was miserable and days when I was full of energy and went past all that. I survived the greatest tragedy of Dutch stairs for a whole semester, shaping my bum each day I had to walk them up and down more than needed. Believe me, these stairs are instruments of torture. 🙃🔫 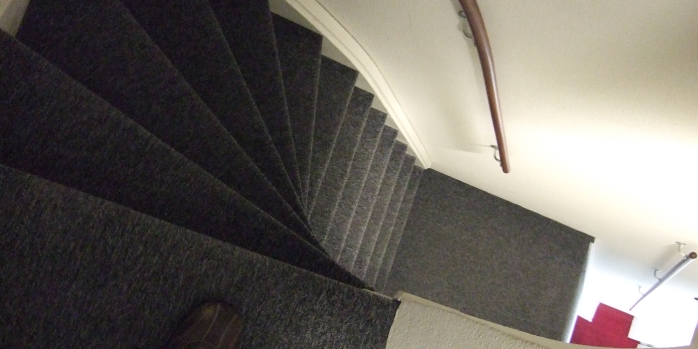 In short, I grew up a lot and went back to things I thought I’d forgotten, which I’m really glad for.

It’s been an amazing year, if stressful at times. As people who know me well should be aware of, with each ending a new set of goals and missions gets forwarded to the world by the Elena department. Which means I write a short list of things I want to achieve in the new year. This time, my list was pretty late too and is at this moment still incomplete. However, I thought I would share with you all what I’ve got so far – hopefully I’ll manage some of these things before the year ends! 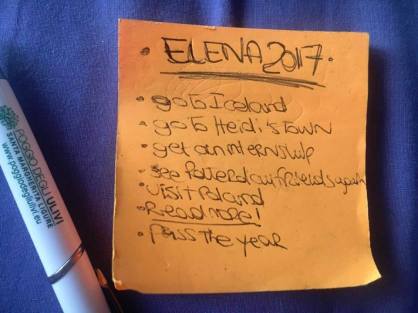 The first goal is one I have always wanted to do but has been in my mind a lot recently and that is to go to Iceland. I have a world map in my room of places I’ve been to and places I want to go to, which I differentiate by putting stickers on the location. I remember as soon as I got it years ago, Iceland was one of the first stickers I put on and right now for some reason all I want to do is go there. The scenery is one thing, but I think the calm and the prospect of complete mental rest is what’s really attracting me so much to this land, so I hope I can finally manage to pay it a visit by the end of the year.

The second one derives from something that we – or at least Italian, French and German kids – all know and love, and that is to visit Heidi’s village. In case you’re not aware of this, you need to know that in the above-mentioned countries we have this really popular cartoon called Heidi, which narrates the story of a little girl having to move into her grandpa’s home up in the Swiss mountains. It’s a story of love, family and growth. I remembered I used to watch it with my grandpa when I was younger and, if you ask any person in Italy, they will know this cartoon. Therefore, when I visited by Rotterdam flatmate in his home country – Switzerland – and found out there actually is a whole village dedicated to Heidi, I knew I had to go. Unfortunately I was only made aware of this once I got back to Italy, so the goal made its way onto my list and I guess I will have to go back to our Northern neighbours by the end of the year. Shame, right?

The third goal is to get an internship, which is something I have definitely been too lazy with in the last couple years. I’ve been too picky with my applications and too lazy to really put my mind into it, which led to scarce results for me. Therefore, this year I’ve decided to actually put myself into it and do my research in time, for once.

Another mission is to see my Rotterdam friends again. The past semester in the Netherlands has been amazing and it allowed me to meet a lot of people I don’t want to lose contact with. I connected very well with them and would love to see them again at least once during the rest of the year – perhaps back in Rotterdam or perhaps if they come see us in Scotland. Who knows?

Next up is to visit Poland. People may recall my hammering them with my potential trip to Poland, which was supposed to happen at the start of December 2016. I had a little tour in mind where I would visit a few small villages in the country, but alas that did not happen. Random deadlines appeared in my life and my traveling dreams were gone faster than an American in front of a diet plan, WHICH MEANS I will do my best to try and go by the end of the year. Looking up the places really got me going and I would hate not being able to see them soon after all. Plus, a friend of mine is from there so it’d be such a shame to not be able to go.

Traveling solo is my next one. I’ve been on trips with complete strangers, sometimes to the other sides of the earth, but never actually on my own. I meant to do that with Poland but as you read in the previous paragraph, that was not possible in the end. So, I set myself the goal of traveling solo at least once this year. I think it’s a good experience that everyone should do at some point – it’s good to travel in company, but being on your own can give you so much freedom too and you might end up discovering things about the places and about yourself you wouldn’t have known before.

My list also contains reading more. Especially in high school, I used to be a total book worm who could never leave the house without her book, or her kindle, or sometimes even both. I used to even download books on my phone for the unlucky situations where I couldn’t have any of the above. In short, I was a freak for reading and went through dozens of books in humanly impossible timeframes.

Moving to Scotland for University somehow changed that for the worst, in a way I still need to understand. I don’t exactly know what happened but my passion somehow diminished – perhaps because of the new life, more things to do, people to know and places to see, but I remember it made me feel incredibly sad and helpless about the situation. However, moving back to Rotterdam made me fall in love with it again, which I am extremely grateful for. I found more inspiration to write and overall the world was just looking a lot better from that perspective, which led to setting myself the goal to not be swayed by Aberdeen once again and to keep on doing what I love. 🙂

This year I am also hoping to pass the year, which is something that’s on my list pretty much every year. University can be a bit tough and one can never underestimate it, right?

Another stupid goal of mine is to be able to go on a longer trip with only carry-on luggage. I’ve been on two / three – day trips where I only brought a small bag with me, but people who know me will know I have a serious overpacking problem in most occasions, which leads to mental breakdowns, empty promises of being more careful next time and frustration when I realise it’s not gonna happen.

Therefore, I decided I not only have to, but need to be able to go on a proper trip, of at least one week or maybe even a month, with only carry-on luggage and to be able to make it last. This is actually one of the goals I am more adamant about and I really need to do it by the end of the year. It is my ultimate mission.

Finally, I would also like to visit my own hometown more. Everybody knows that when you have something, you tend to stop paying attention to it and underestimate its worth. Whenever I speak to someone about where I am from, my words are always full of praise and I can honestly say it’s one of the most beautiful places I’ve seen. And yet, whenever I’m home I hardly ever go to any of the places I talk about to people, merely going for coffee in the same old places and waiting for the day I leave again. Whilst it’s good sometimes to go back to your old favourite places, this year I want to dedicate myself to re-discovering my region and all its beautiful spots. Perhaps I can do that when friends come see me and I have to show them around, perhaps on my own. Either way, it’s something I need to and I am really looking forward to. 🙂

These are my resolutions so far. It’s a pretty short list as I said, but I think I will keep adding more and more to it as I go on. In my mind I have at least until the end of January to do that without feeling like I’m cheating so it’s all good. RIGHT?

Sooo. What about you? Have you got any goals or missions that you want to share for this year? Have you learned something new? I would love to hear about them, or to get a link to your own blog posts with your lists. It’s always good to confront with others and who knows, maybe we have things in common or things we’d like to try ourselves!

Either way, I wish you all an amazing day and good luck with any of your plans for 2017. It’s gonna be a good year! I can feel it. 👻

← CHRISTMAS IN ITALY: A FAMILY BUSINESS
A BREAK IN SWITZERLAND →